Went to Steven Holl’s Linked Hybrid, which turned out to be much shorter than the impression that I got from the pictures, perhaps because the buildings beside it were at a Chinese scale of 50 stories. The architecture was unsurprisingly like the photos. I almost wished that there were more surprises to discover, even though the cinema was rather pleasant to find, especially when this building did not scream ‘look at me’ like the other ones. Unfortunately, the linked hybrid does not work as a public square as the entrances are heavily guarded. The combination of residential blocks surrounding public-serving restaurants and a stand-alone cinema was a wild stab by an American architect trying to create publicness in a residential community. But how can you prevent gated communities when the definition of ‘good’ is exclusivity? On the other hand, however, maybe it is a look at what the definition of ‘public space’ is. People who lived in the linked hybrid obviously enjoyed the courtyards and water features. There were mums with babies hanging out on the bridges and couples taking strolls. That use of space is public to its residents, a feature that is common in almost all gated communities. There is a need for public space close to home, or in other words, public spaces that have their basis in residential quarters. Why would other people use these public spaces other than for commerial/entertainment uses? So the question becomes, why does the gated communities need to be public to everybody?

Our competition entry, ‘public: private’ is about the filtering of privacy using ‘JIN’. How do we make use of this traditional concept of room-courtyard-room-courtyard-room… to create a space fitted for modern living? This project attempts to create the filtering from the public hutong to a public event space to a semi-public/semi-private office to a private studio apartment.

At the Bau Congress, I attended a Chinese Architecture Talk that focused on China 2020: The Rural and the Urban. During the series of talks, there were projects looking at development of the rural village and urban historic districts. Professor Liu Boying for example, spoke about the Kuan-Zhai Alleys in Chengdu and the preservation of the historic urban district holistically in the city.

Kuan Zhai Alleys is marked as ‘Distinguished Historical Commercial Streets’ (特色历史商业街区) and a success example of historic urban preservation. However, the commercialisation and middle-class-ification of the streets  makes one wonder how success is measured. It seems that gentrification is an unavoidable (and here as in Baitasi, an unvoiced) effect of urban redevelopment.

One other interesting project is titled ‘Vague Architecture Design’ by He Wei. His project sets in a rural village and focuses on a restoration of a old grain warehouse into an active workshop space for the production of oil. By reactivating the traditional methods of making oil and turning it into a visible process for exhibition and participation, the project turned the building into a space of economic production and new connection between the rural village and interested urban residents.

Dashilar and Baitasi differ significantly. Dashilar was a redeveloped historic hutong area in front of the Tian An Men Square. Being on the main axis of Beijing, Dashilar’s central location meant that it is a big tourist spot. After redevelopment, it is now adorned with many signs of modernisation and gentrification. Cafes, shops, architecture studios, and exhibition spaces are regular fixtures on its narrow streets. Dashilar is similar to many commercialised historic streets where the type of tourist-targeted goods and shops are also repetitive. 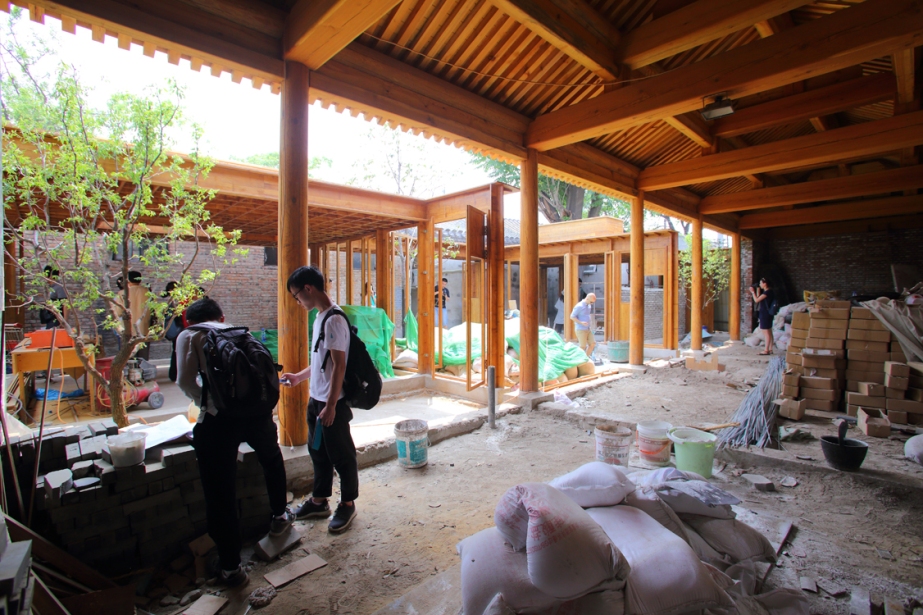 Vector architect’s invited project at Baitasi, in construction. Meeting Dong Gong at his office in Chaoyang, we talked about his micro-regeneration courtyard in Baitasi and also the way the entire project is run. The method of redevelopment is called ‘Willingly Vacate’ (腾退) which means that owners of the properties come forward to the local authorities. The two parties will then sign papers for the owner to vacate their properties for a sum of money agreed between them. This method works in this hutong area because 1) whoever is still living in the area means that they are poor and could not afford to move out, including the owners; 2) stricter restrictions on construction mean that owners cannot build to create highrise rental apartments 3) therefore it makes more economic sense to give up their property for a good amount of compensation.

This is a similar story with the converted mini-library from a couple of blogs back. That property was able to be converted into a library because the owner, an old lady, passed away and her having no heir meant that the property went to the state automatically. Because of this reason, the property could be used for other purposes.

Designs of the courtyard. The design explores how public and private spaces could overlap in a combination between residential and commercial programmes in a courtyard house. (http://www.vectorarchitects.com/m/index.php/project/detail/57)

Third time, my friend and I went to walk around the site on our own. When we were leaving, we chanced upon a small stretch of park space sandwiched between the hutong area and the main road on the west. This was a space that provided for public activities – dancing, haircuts, karaoke, children to run around. It was an extremely successful public space that exists in the form of a street. Are there elements of this that can be replicated in the new designs?

Selection of site: a rectangular piece of land, currently a three storey building.

How B2 looks like from the outside (highlighted in magenta in the first picture):

One of the courtyards has just started demolition. I felt that it was almost wasteful that all the materials are just being thrown away – the doors, windows, mirrors represented a piece of life story in the hutong.

However, it also made me question myself whether that was being unnecessarily nostalgic. What is actually good for the area? Whose needs are we catering to? With the functions of the 12 courtyards being fixed by the organisers, it makes me wonder how the decisions were reached. Talking through the streets and speaking to the residents, it became slowly clearer to me that the residents are aware neither of the competition or the events that have taken place previously. It is interesting to me that the competition and the designs that are produced will not be serving the needs of the immediate community but answers on the level of the city, a hypothetical need for future art-related spaces and for the preservation of historical buildings, techniques and streetscape. It raises the question whether these two needs are necessarily mutually exclusive and whether there are opportunities for them to be combined.

Walking around the site, I wandered into a tiny library and was met with a friendly librarian. During our chat, she shared that the library was set up by the local authorities and provides free books for the community. People living in the area are free to visit, borrow books and sit down to have tea. Many young children visit the library because it is a quiet space to read and study. at times, the library also becomes an event space for talks on Chinese medicine for example. She also shared that because the library is very small space, residents who visit have suggested that it would be good to have larger spaces for larger gatherings and also possible open spaces for dancing etc. It would be interesting to see whether there are opportunities to combine these elements into the design of the new building.

Most of the buildings in Baitasi are single storey pitched roof buildings. There are also a large number of sheds constructed in courtyard spaces. The site visit was organised by the competition team and participants were requested to not visit the site on their own. That came as a surprise to me as the competition was introduced to speak about the community and but direct engagement with the community was in fact discouraged. During the conversations with the organisers, it became clearer that the direction of the area’s development has already been fixed and as participants, the proposed functions of the new buildings should follow the list provided by the organisers. 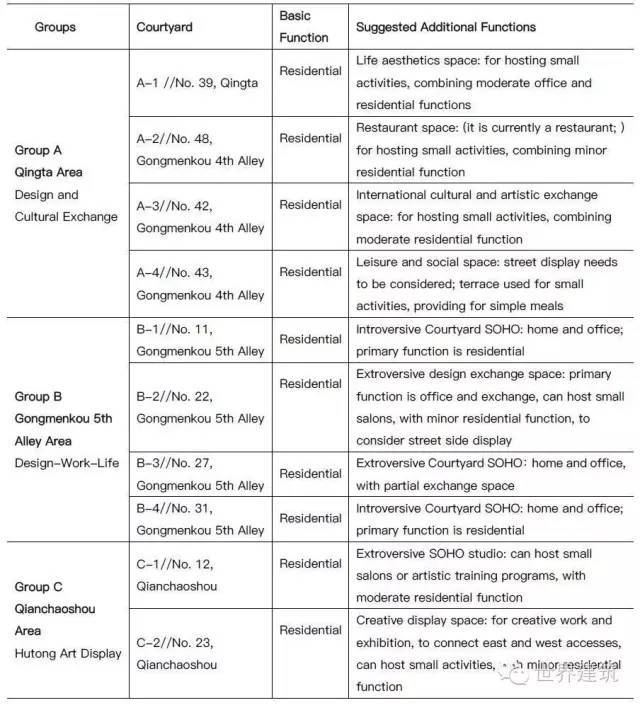 Following the competition organisers around the area, one of the first places that comes in sight is the Baitasi office. This has been the venue for exhibitions and interactions during Beijing Design Week since last year.

Walking through the 12 courtyards, the living conditions within the courtyards become increasingly clear. Most of the interiors are crowded – rooms are small and many have double decker beds in them. The current conditions of the courtyards vary from completely empty, abandoned to occupied.

The buildings on site are mostly brick buildings. Some are proper traditional buildings while many others are simple brick sheds. Talking to the organisers, it was clear that any buildings with historical value need to be properly conserved while any others can be demolished.

Below is an excerpt from Beijing Design Week website

Sandwiched between Beijing’s commercial and financial districts, Baitasi (meaning “The White Stupa Temple”) is a largely residential area that is populated with temples and ancient buildings. It was founded during the Yuan dynasty (1271AD-1368AD), preserved itself during the Ming and Qing periods, and survived Beijing’s almost city-wide urban redevelopment that partnered China’s opening up to the world in the 1980s and 1990s.

Sixty-seven per cent of the traditional courtyard houses that make up Baitasi (known locally as Siheyuan) are owned by the Chinese state. They stand in various states of disrepair, renovation and modernisation, with just 31.9 per cent of homes in Baitasi having a private toilet. In 2009, Baitasi was declared one of 25 protected sites in Beijing and Beijing Hurong Jinying Investment & Development Co Ltd – “the same developer that operates in Financial Street,” says Leanza – was appointed by the Chinese government to address the ongoing preservation and revitalisation of the area.

From the competition organiser:

By renovating the traditional courtyard spaces, the Batasi project attempts to recreate the courtyards’ various possibilities of spatial and functional recombination—to revive thespaces, to make different functions coexist. Besides the basic residential function, vigorous cultural and creative functions are to be added to the courtyards. By exploring and introducing cultural catalysts, the purpose isalso to revitalize the Hutong culture of the area and revive the eastern residential ideal of Hutongs and courtyards. In seeking ancient architectural wisdom within tradition, it hopes to breathe new life into the space of Beijing’s old town and explore ways in which urban development can coexist with traditional urban areas.

This open international competition is to take place among three groups who have been solicited to draw up refurbishment plans of 12 courtyards. Finalists whose plans comply with the design guidelines and show construction feasibility will be authorized by the organizers to implement the project and it will be made available for reference in the Baitasi district, the broader old-town districts of Beijing, and in revitalizing old towns throughout China.