The artist collected abandoned items from the village and arranged them into a frame on the wall. The items are also stuffed with seeds and left behind to grow on their own. The installation questions what is left behind after the demolition, whether it is the people who still need to live in the demolition or those who are forced to move elsewhere. The artist will care for the seeds during the period of the exhibition, but what will happen to the plants after?

A group of artists converted a fallen tree into a play space for children in the village.

Another installation was an artist picking out 50 items from the demolition site and sending them to a kid’s art school where he teaches. He tells them the story that a little mouse was in nepal and experienced an earthquake and after that the little mouse travelled to the urban village and experienced demolition. The children then uses their imagination and one item to draw out their story. 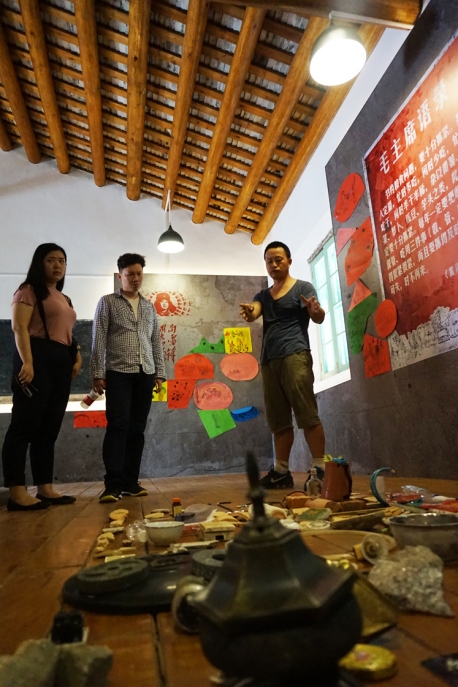 Uncle who lives in the village. He earns a living through recycling waste watches from the factories. These watches are unused but thrown away. The uncle disassemble them and recycles the metal bits for money.

The artist bought the metal parts from the villager and used it for his installations that speak about electronics production and waste in Shenzhen. 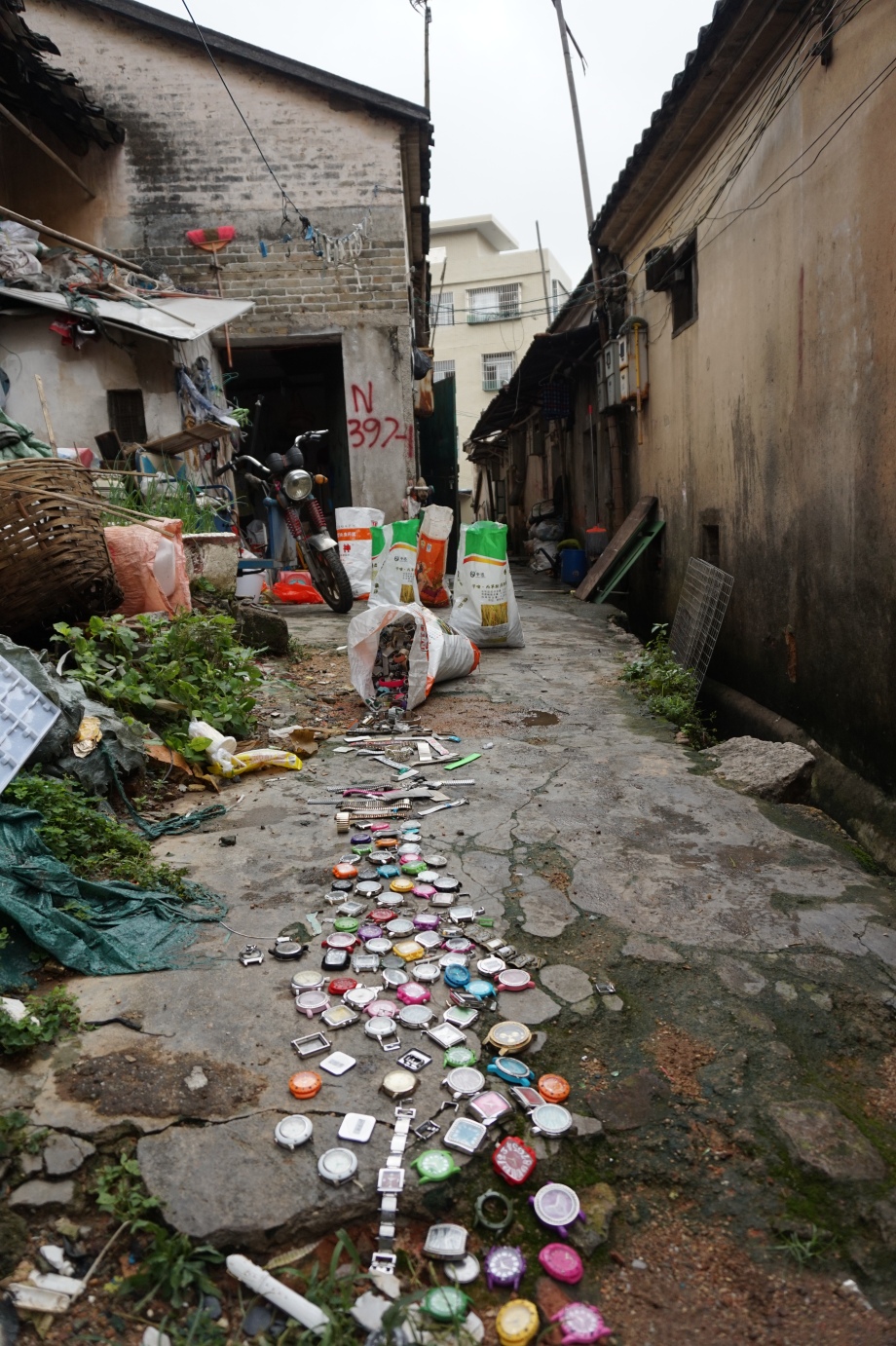 He also made a cross to respond to the church that used to be highly present in the village. However, the cross could not make it into the final exhibition because of its religious nature.

Monsoon season in Shenzhen and urban flooding on the road near Dalang. I was told by the residents that whenever there is heavy rain, this area gets flooded, mainly due to the drains getting blocked.

A gospel school was preserved in the demolition of Dalang. The complex was built and used by the Presbyterian church as a school for young women. The complex was given over to the local authorities and preserved now as a exhibition space, museum and classroom.

The architect in charge of the conservation project shared that they were also trying to conserve some of the houses that were near the complex. However, it was like a competition with the developer as the team also has to buy the house from the owner.

Conserved building in the foreground was bought over from a villager. The left side of the building cannot be conserved because that owner did not agree on the terms.

Dalang is an urban village in Shenzhen.

A deal has been signed with a developer to redevelop the land. Some of the buildings with historic value, such as a watchtower are also marked for demolition. 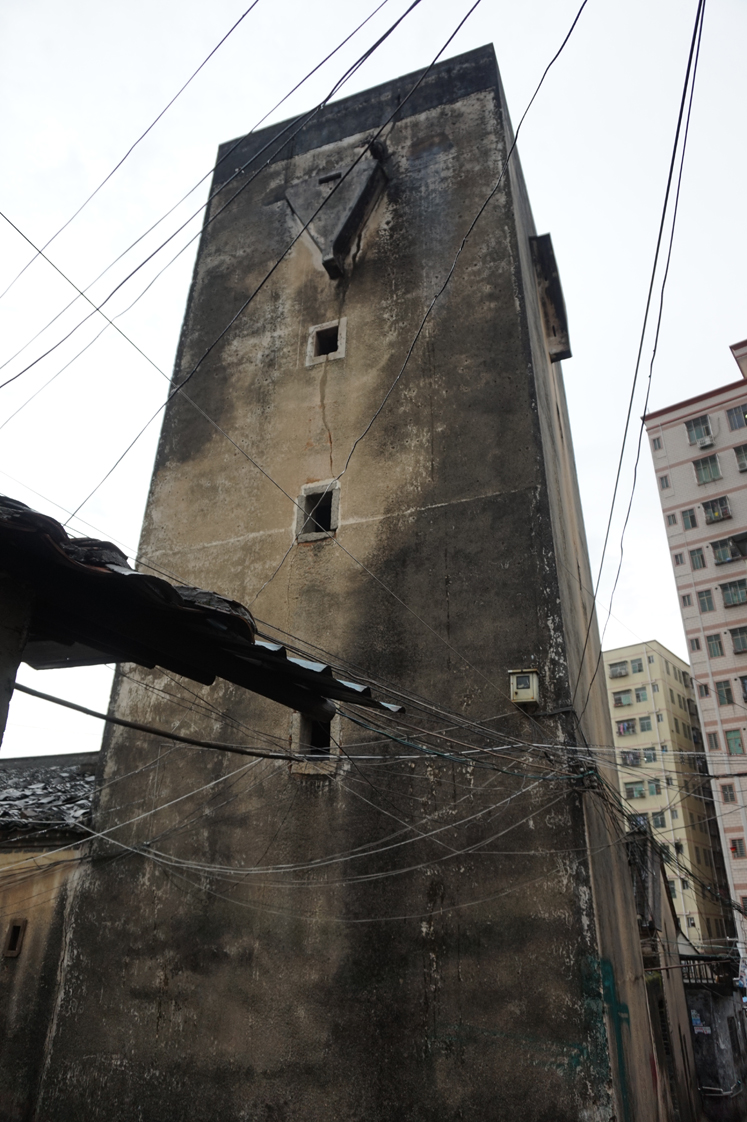 Some of the buildings in the village are still being lived in. Any marked up building with a number indicates that that household has already signed a deal with the developer. The families left behind live amongst the rubble. One of the signs say ‘demolition site, growing vegetables is strictly prohibited’.

House with a number, marked up for demolition.

The arts workshop was organised with the intention of gathering more attention to the lost heritage during the redevelopment of urban villages. The artists are invited to listen, record and most importantly respond to the situation in their own interpretation.

Shenzhen does it differently. Dalang Arts Workshop was organised by a bunch of artists, one academic and one architect. It involved them going into an urban village, staying there and acting on the things that they see and hear. Compared to Shenzhen, ‘acting’ or intervening in an urban village is quite rare in Guangzhou. Guangzhou is more familiar with listening and recording, while in Shenzhen, interventions are readily accepted. Chen Zhou, one of the invited artists to the workshop who has been working on urban villages in Guangzhou for ten years, explained to me that Shenzhen is still a much more open city than Guangzhou. The latter is traditional – ceremonies, rituals and rules are important. The former is new – the Bi-City Biennale for one is an example of creative and experimental ways Shenzhen treats the future.

(Image above: the red word ‘demolition’ is often found on walls of buildings marked up for demolition. Artist here has added a word ‘no’ in front of ‘demolition’)

And therefore I was pleasantly surprised when I reached Dalang. The artists started the workshop by walking around, observing and listening to the village and its stories. And very readily they also started working on the site – collecting materials, drawing or making small installations. 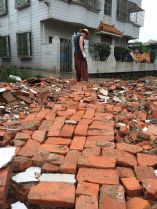